Bernadette Prochaska died on the morning of January 6, 2021 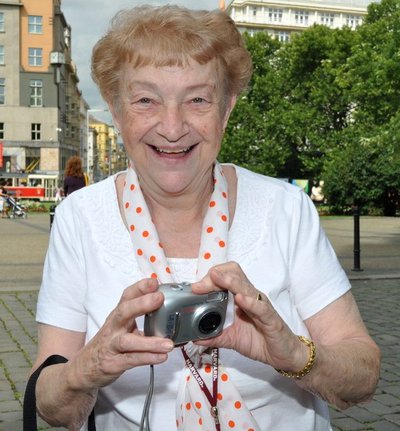 Sister Bernadette Prochaska FSPA died on the morning of January 6, 2021. That is, the day after the feast of St. John Nepomuk Neumann and on the day the Epiphany of the Lord is celebrated.

John Neumann originally came from the territory of today's Czech Republic, as well as the ancestors of Sister Bernadette. And the two worked fruitfully in their new homeland in the United States under the banner of Jesus Christ.

Both were emissaries of Jesus Christ the King, to whom both the shepherds and the three sages came, as well as Setter Bernadette and Jan Nepomun Neumann face to face. Jan Nepomuk Neumman on January 5, 1860 and Sister Bernadette on January 6, 2021.

Sister Bernadette was (and still is!) a great, rare, joyful, funny, humorous, peace-spreading, kind and loving woman. Let us pray for her and look forward to meeting our and her Lord and her. And of course with John Neumann :-)

Sister Be, thanks for your full life,
which was a joy for many
who could meet you!
Please pray for us to God!

Ignac
(a permanent and imperfect disciple of English and Jesus
and a grateful brother and friend of Sister Be :-)

On this page you will also find:

Sister Be's favorite song with Sister Be: Lord, you have come to the Seashore (amateur video).

Alleluia! Christ is risen, as he promised! Matthew 28:6

Bernadette Milada Prochaska was born on June 15, 1932 in Montfort (Castle Rock), Wis. to Frank and Victoria (Roh) Prochaska in the house built by her grandfather who came to America from Bohemia in 1871. She remembered growing up in a “cheerful and happy Bohemian home” with her nine brothers and sisters, where everything was considered a blessing from God, both sickness and health. She was encouraged to enter the convent in La Crosse by her parish priest, who knew the sisters there. At age 14, Bernadette joined the Franciscan Sisters of Perpetual Adoration as an aspirant. She entered the novitiate in 1950 and was given the name Sr. Melissa. She later went back to her baptismal name. Her first profession of vows was made in 1952 and final vows in 1958.

In 1981, Sister Bernadette moved to Milwaukee where she began a career of 36 years at Marquette University, as an instructor, associate professor, professor and assistant dean of the English department. She has an extensive list of publications and presentations across the country. While at Marquette, Sister played the organ at Gesu Parish and after retiring from teaching English, she ministered as receptionist at the parish until she moved to St. Rose Convent in December 2016. For several summers, Sister Bernadette served as lecturer at the University of Hawaii, Honolulu and Cardinal Stritch College (University) in Milwaukee. For almost 40 years, Sister Bernadette played background music once a month for televised Masses in the Madison Diocese as part of their Apostolate to the Handicapped. In 1992, Sister Bernadette responded to a call by the U.S. Catholic Bishops to provide summer English classes to clergy and religious in the Czech Republic, a ministry she continued until 2015, often assisted by other Franciscan Sisters of Perpetual Adoration.

Once Sister Bernadette retired to St. Rose Convent in La Crosse, prayer and ministry were at the top of her daily schedule. In addition to taking numerous adoration hours before the Blessed Sacrament, she also played organ for convent liturgies and continued playing the organ monthly for Madison Diocese. She also volunteered as a receptionist at Catholic Charities.

Friends, family and community members remember Sister Bernadette as always spreading cheer to someone in whatever way she could and sharing her gifts and talents with others. Family and her Castle Rock relationship were very important to her. She loved her connection with the people of Prague and enjoyed all the opportunities the city provided each summer as she taught English. Besides her friendliness and graciousness, her basic knowledge of the Czech language endeared her to her students and the local people. She also enjoyed sharing her professional expertise through service on numerous boards, including Viterbo University’s Board of Trustees.

Sister Bernadette is survived by her Franciscan community, and numerous nieces and nephews. She was preceded in death by her parents and her brothers: Joseph, Francis and Laurence and her sisters: Mary Ann Lipska, Elizabeth Pink, Catherine Prochaska, Agnes Bomkamp, Theresa Prochaska and Barbara Bollant.

A virtual sharing of Sister Bernadette’s life will take place, Thursday, Jan. 7 at 6:30 p.m. Due to Covid-19 restrictions, the Mass of Christian Burial for Sister Ladonna will be live-streamed on Jan. 8 at 10 a.m.. Sr. Bernadette will be buried in the family plot at St. John’s in Montford in accord with Covid-19 restrictions. Jandt-Fredrickson Funeral Home is assisting with arrangements.

Sekce: Bernadette Prochaska died on the morning of January 6, 2021